How To Find Your Vocal Range

Every singer would like to know what their voice type is.  Try our easy to use video to help you discover what range you sing in.

First we will find the lowest note that you can reach.

Simply hum or sing ‘la’ to each note that is played.

On screen you will see a code appear each time the note changes. Eg G4.  These codes are the notes being played on the piano, and at what octave.   When you reach the note that you feel is your lowest comfortable note. Write down the code.

Next we will try to find your highest note that you can reach.  Again sing ‘la to each note that is played and write down the highest comfortable note you achieve.

You should now have to sets of codes

Compare them to the chart below to give you an idea of what range you sing in.   I have included a brief explanation of the different singing ranges below, and an explanation if your codes are outside the guidelines of each range. 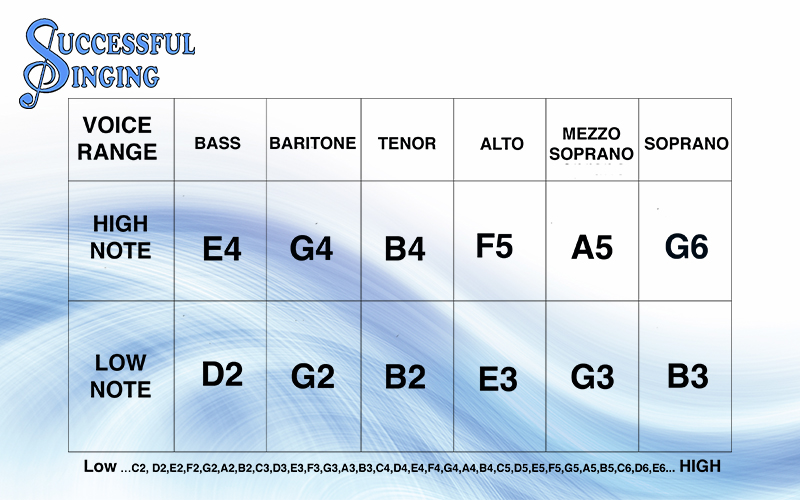 This is the lowest female voice range. generally very similar to the male tenor range – from F below middle C to a high D (F3-D5).  In choral work, altos generally support the harmony to the soprano’s melody.  Famous Pop alto singers include Adele, Alison Moyet, Shirley Bassey and Patsy Cline.

The middle range and most common of the female voice, generally ranging from G  below middle C to high A (G3-A5)

In choral music, Mezzo’s usually sing along with the sopranos, although sometimes, soprano parts may be split into two and the mezzos will take the Soprano 2 part.

The highest female voice range, generally ranging from middle C  above Top C: (this is a conservative range estimate for a professional singer. A true soprano can often reach a top E or even higher).  In choral music, the soprano’s often get the melody line.  Famous pop sopranos include Kate Bush, Sarah Brightman and Dolly Parton.

This deepest male voice, generally ranging from a low C, two octaves below middle C to E above middle C (E2-E4).  In Choral basses may have rather monotone harmonies.  In opera, basses probably have the greatest range of roles.  Famous Bass singers include Nat King Cole and Louis Armstrong.

The middle range for the male voice, and is the most common of the male singing voices.. It ranges from the second G below middle C to the F above (G2-F4).   Most male pop singers sing within this baritone range.

This is the highest of the male voices, with a vocal range of  C below middle C to G above middle C (C3-G4). In Opera, the Primo Uomo (principle male) is most often a tenor.  Famous pop tenors would include Michael Jackson, Phil Collins and Freddie Mercury.

This is one of the most rarest of male voices.  A true countertenor is a male singer who can sing as high as soprano, without using falsetto.  However many singers who sing in the counter tenors have developed a very strong and powerful falsetto.  Counter Tenors were highly prized in 16th Century church music and many boys underwent castration to prevent their voices from breaking.  They were know as Castrato and the last know was Alessandro Moreschi who died in 1922.  Here’s a recording of him.

I’ve got codes that are outside the singing ranges suggested

The suggested guidelines for the singing ranges are standardised.  Music written for eg. a Bass singer will be written within this range of notes. Many of you will find that you have a range beyond

eg : Alto range.  You can reach below the low F and you can easily reach notes beyond the high D.

This is where other factors (explained below) which will determine your voice range. Depending on what genre of music you sing, or even the role you take, your singing teacher, choir or music director may point you into the Mezzo range or feel you are more suited to an Alto range.

The different characteristics which, also factor in determining your voice type:

Something else to mention, especially in the pop genre, singers have what are called ‘Money Notes’.  This is the part of the song, which the singer’s voice can being out the most emotion or dramatic part of the song, have a challenging technique or reach high notes that are difficult to sing, It all helps sell tickets or albums, for which the singer become well-known for, but it may not always sit within a particular voice range.

Every singer has a unique voice, and should sing what is comfortable for them.

Lyric Sheets for the video singalong

We use cookies to ensure that we give you the best experience on our website. If you continue to use this site we will assume that you are happy with it.Ok